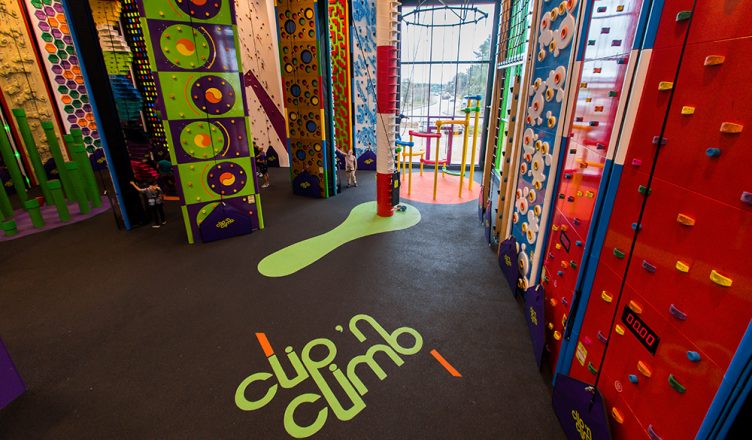 The Clip n’ Climb project began with an enquiry from one of their management team getting in contact with our Hughes Trade rental branch in Norwich. They enquired about the possibility of renting a few panels from us for the new purpose-made venue being constructed in Ipswich.  An appointment was made for Karl from Trade and myself to meet up on site in Ipswich to see what their plans were and what would be possible.

It became very clear as soon as we walked into the building that there was huge potential for what we could deliver, with multiple screens dotted around in various areas being the key.  Options to have multiple screens joined together in video walls, along with a method to distribute HD Content over the network of screens easily all being considered.

While finding suitable screens would not cause an issue, the way in which content could be displayed on each was what required planning, with HD over IP systems being my initial consideration as this could be centrally managed.  As a second option, digital signage was also a possibility. This wouldn’t require a central distribution system, but would require a screen with SOC (System On Chip) functionality to work.  In either situation a network of data cable would be required, with each potential screen requiring a feed that ran back to the office in the middle of the building.

Due to time restrictions and the immediate finishing of the walls around the building, a proposition for a number of screens was put together.  This included building video walls along with installing single screens. Renders for the areas where screens could be used were produced for reference, with provisions being made for extra screens if needed.

After the on-site electrical and mechanical contractor had installed all of the cabling, a visit was quickly planned to go over the installation cabling and what options each area could benefit from. It was decided that the best solution for multiple screens would be to use a digital signage display that can be remotely updated using signage software supplied by ‘Signage Live’.  This would enable each screen used to be programmed with promotional material using the dedicated software via a single computer. This PC also controls the schedules to power the screens on/off and which content is shown each day.

A final visit was made a week later with a solid proposition for the layout of the system, with each area being looked at and evaluated for a suitable screen size.  This was taken back to the office in order to produce a final quote which was later accepted under a Hughes Trade rental contact over three years. This is a perfect example of what our Hughes Smart team can do for local businesses. To contact our Smart team today, please click here.

View all posts by DS →

Take Greater Control of Your Environment with Hughes Smart