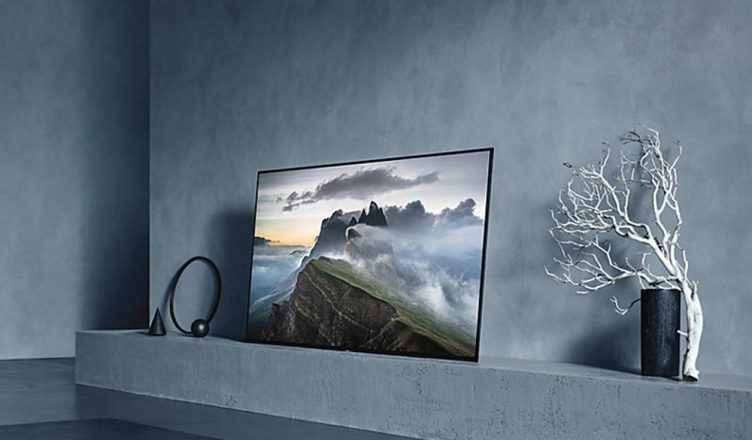 Organic LED televisions have been on the cusp of being the next big thing since Sony introduced an OLED TV, back in 2008. The 11 inch screen, which cost a then eye-watering £1300, was the company’s first and last foray into OLED screens until the launch this year of the new 55/65 inch A1 range. Having heard so much about the Sony A1 before its release, we were excited when the 55 inch model arrived in-store and was eagerly unboxed.

The A1 is a showcase of the stylishly minimal industrial design with which Sony are synonymous. Resembling a sleek, black picture frame it is devoid of almost any adornments, even the Sony logo is hidden away on the bottom left hand corner. A subtly glowing white LED at the bottom of the frame indicates the TV is active. The frameless screen is supported by a kickstand that cleverly houses all the A1’s internal components, allowing the screen itself to remain very slim, along with four HDMIs, three USBs and other AV connections and the subwoofer for the innovative Acoustic Surface™ sound system. The stand can also be folded into the back of the TV enabling the set to be wall-mounted, if required.

Taking full advantage of the benefits of OLED the A1 delivers an amazing 4K UHD picture. Unlike an LED screen all 8 million pixels are self-illuminating allowing for precise control over the darkest and brightest points of the image. Support for High Dynamic Range means you’ll be able to see the extended colour range, enhanced contrast and clarity available from the steadily growing selection of UHD Blu-ray discs and other sources such as Sky Q and Sony’s own PlayStation Pro games console. A firmware update has recently added support for the BBC’s new 4K broadcast format HLG which will allow 4K video to be access through the iPlayer catch-up service and further support for Dolby Vision is promised later in the year. The upscaling abilities of Sony’s X1 Extreme processor are well used to ensure that even standard and high definition content still looks great on such a large screen size.

The A1 doesn’t have speakers in the traditional sense, instead Sony’s Acoustic Surface™ technology vibrates the screen which in turn generates the sound. Though flat speakers are nothing new, any flat surface can be made to produce a sound if vibrated at the right frequency, it’s the first time this technology has been applied to a television and the real achievement is that Sony have managed to deliver a stereo sound from a single flat surface. Two separate “actuators” on either side of the TV vibrate the screen producing a sound that feels as if it’s coming directly from the action on screen. The subwoofer built into the stand fills in the lower end of sound. While still not better than a separate Sony soundbar with a subwoofer the A1 is able to produce a bigger, clearer sound than probably any other television currently on the market.

Like other mid-range and above Sony televisions the A1’s smart TV side is powered by Google’s Android TV meaning all the UK terrestrial catch-up services (BBC iPlayer, ITV Hub, All4 and Demand 5) are present and correct along with YouTube, Plex and a host of other apps. Sony has also ensured the latest 4K compatible versions of Amazon’s Prime Video and Netflix are available, although you’ll need fast fibre broadband to enjoy them. The catch-up services can also be accessed through the YouView programme guide, allowing you to roll back through 7 days of shows without having to navigate individual broadcasters apps which makes finding programmes you’ve missed easier.

Sony has created an exceptional television with the A1. I’m hard-pushed to remember a TV that has so uniformly impressed everyone who’s seen it running in the shop. Watching the ultra-high definition Blu-ray of the BBC’s Planet Earth II is an eye-opening experience; the colours and detail in the picture is astounding and once you start watching it’s difficult to stop.

Available to online, you can also use our Click & Collect service to pick up your TV in as little as one hour! You can enjoy all the benefits of our hassle-free rental service when you rent this TV; ask in-store for details or find out more online. You can also ask your local store about a demo.

View all posts by MW →

Get Social with us…